Based on the 695 Biposto, only 133 of the limited edition “Record” in the colour ‘Modena Yellow’ will ever be built and sold worldwide.
It is now on sale at £36,610.00 on the road.
The reason why only 133 cars will ever be built is that Abarth have 133 records to their name. It also coincides with the 50th anniversary of Carlo Abarth. At the age of 57, he broke a new acceleration record in a class G car at the Monza race track in Italy.
Carlo Abarth lost 30kg in weight so he would be able to fit into the cockpit of the car. (That’s true commitment).
In October 1965 his Fiat Abarth ‘1000 Monoposto Record’ Class G broke the fastest record over a quarter of a mile and 500 metre distances. 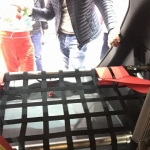 “The stunning Modena Yellow colour is enough reason for anyone to want to own a 695 biposto Record,” says Gerry Southerington, brand manager, Abarth UK. “Add in the awesome performance, the standard equipment, the history, and the fact that only 133 examples will be made, we are confident that the car represents a very desirable package that will strike a chord with the Abarth enthusiast.” 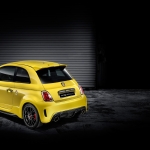 This has to be the ultimate Abarth that is road legal.

If I was lucky enough to own one, I would be greedy and would like to own two.

One to keep in the garage in showroom condition and the other one to brave the British weather and the country lanes with.

With only 133 ever being built, every time you step inside the Abarth Record, you will be reminded all of the history and what Abarth truly represents will be there under the control of your right foot.

If you are a investor in rare and classic cars, I think its a no brainer.