McLaren Automotive have announced they will be opening a new dealership in Bristol.

This new dealership faculty will be located at the Laurels Cribbs Causeway and will be operated by Rybrook Holdings who already run a McLaren dealership in Birmingham.

McLaren Bristol is expected to be opened in quarter 2 of 2016.

Jon Pollock, Regional Director – Europe for McLaren Automotive, commented: ‘We are pleased to announce this important appointment in the representation of the McLaren brand in the UK. Rybrook Holdings is already an important business partner operating one of the retailers which the McLaren brand launched with in 2011, and this latest location in Bristol is perfectly situated to help support customers in this vital area of the UK – our third largest market globally.

McLaren Automotive will have 6 retailers in the UK.  London, Birmingham, Manchester, Glasgow and Ascot.

Now the West Country folk don’t have to travel so far for a new McLaren. 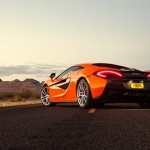