Could one of the cars in this report be an important game changer? Or maybe both? Let’s start with the Merc below: 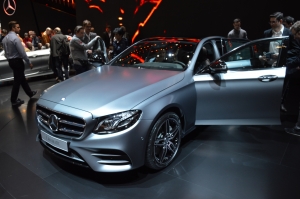 This is a handsome car that looks good parked in any airport taxi rank (anywhere in the world) or cruising on the motorway or autobahn.

If this car was a suit it would definitely be a timeless classy suit from Savile Row. I was immediately drawn to this Grey E400 4Matic.  As I have said before, on my previous post on the new E-Class, the styling is a mix between the S-Class and the C-Class which isn’t a bad thing as it works well.  What really opened my eyes and where this car really excels is inside. I find the previous Mercedes Benz E-Classes to be one of the most comfortable cars I have ever driven or been driven in, and just sitting inside this is no different. Up front I couldn’t keep my eyes off the wide high resolution dual display which is the focal point of the dashboard. Even though I couldn’t find how to change the language to English I found it very easy to go though the menus and sub-menus with the new touch sensitive steering wheel buttons. You can swipe, your fingers over the black pads (see in the picture left and right pads on the steering wheel) using the same principal you would use with an ipad or smartphone. It’s all done with your fingers. 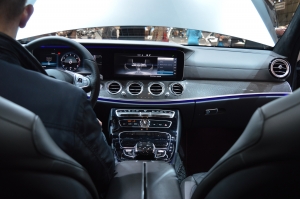 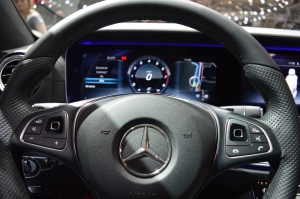 Adjusting the seat and steering wheel was easy to find the perfect driving postion. I still had a lot of room between my legs and at the bottom of the steering wheel. The seats seem firm but not in a bad way. The driver and passenger footwells seem huge and this will help in making any journey in the new E-Class a relaxing one.

You can easily fit 3 adults on the backseat. I was surprised that the transmission tunnel, that runs alone the centre of the floor, is low and quite narrow. So if you are the person sitting in the middle of the rear seats there is no need to lift your leg up high to step over the tunnel or have your legs open far apart. 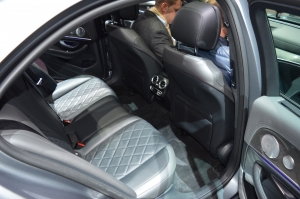 The rear boot has a massive opening and a very workable flat area for luggage. 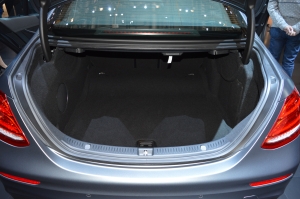 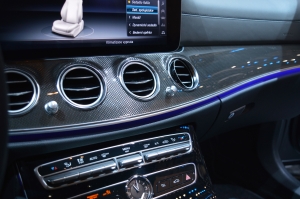 So this is a car that is so much better to be inside of than outside of. I definitely prefer the inside styling more.

If you were thinking of ordering a current Audi A6 or maybe a BMW 5 series (which both are due for a change soon) I would really recommend you check out the E-Class first. The game has been moved on by Mercedes in this class war. 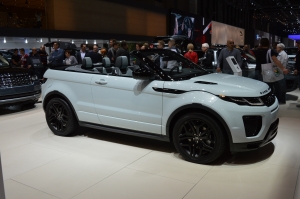 This is the first time I have got close to The New Range Rover Evoque Convertible because when I have seen it it has been going in the opposite direction on the motorway doing some final tests.

I will commend Jaguar Land Rover (or any car firm) on being brave and doing something different.  But by cutting the roof off??? I am not sure that was the right thing to do?? The standard Evoque is such an elegant looking vehicle with a touch of futuristic style thrown in.  It has striking piercing headlights, low roofline, big bumpers and big wheel arches which makes it too good looking a car to go off road! I think that the only time it will get a bit dirty, and go off road, is when its owner parks it at the River Cottage HQ and then goes off and enjoys a lovely feast. I always thought of it being brilliantly executed in design… and lets not forget Victoria Beckham doing her bit with the interior!

This convertible in my eyes is wrong.  With the roof down it reminds me of one of Barbies toy vehicles. It should be pink with Ken in the passenger seat!

Somethings in life just shouldn’t be messed around with and I believe the Evoque 2 or 4 door is one of those things. Maybe a midlife facelift, change of front and rear lights, trims and colours but not chopping the roof off.

When you get past its looks roof up or down, the interior is what you would expect from a Evoque. Inside is oh so sophisticated and cool. Fitted neatly in the centre of the dash is the new high-resolution 10.2-inch touchscreen which is JLR next-generation infotainment system. I would think it’s hard to wear a pair of muddy trainers in here let alone dirty Hunter boots. It would be disgraceful to mess up the inside of the Evoque. So all is familiar and splendid upfront. Unfortunately the same can’t be said for the rear seating area. Rear leg room isn’t much to shout about at all, it is very cramped back there. Poor I would say from a car this size. 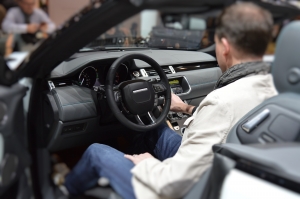 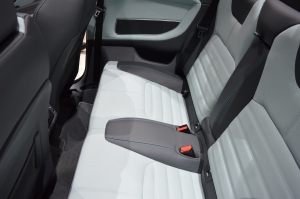 So my questions are:  If you are an adult like me, would you want to travel in the back where you may have to be air lifted out if you are there any longer than for a short drive due to numb legs and not being able to move?

Be Ken upfront in full view in the passenger seat??!!

Think long and hard before answering.

A plus point is the rear boot, when I opened the rear lid, I found a good usable wide opening space. Not what I was expecting since most of the top area of the boot is now where the roof folds into. 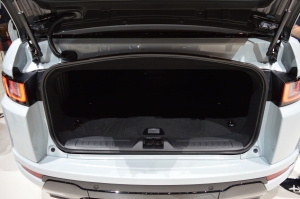 Maybe in certain areas around the world it wont look so bad. Dubai? Las Vegas? Or even maybe the Cheltenham races?  This would be a great idea, you could put the roof down, stick a camera man or woman in the back and follow the horses around the course with closeup footage. It can do all the off roading stuff it’s a Land Rover!  I’ve found its first commercial use!!  I shall send an email to Channel 4 horse racing TV.

If you know of any other places it will look good, or any other uses for it, please comment.