We Blog Any Car had the chance to test the new Vauxhall Insignia GSI.  It is not a subtle looking machine….(with its aggressive side skirts and sculptured front and rear bumpers). When I first saw the Insignia GSI, at the Frankfurt Motor Show 2017, I was glad that Vauxhall had chosen this sportier styling direction now that the famous GSI badge which it wears proudly on the rear tailgate is back. 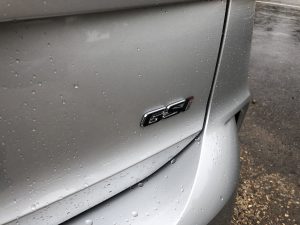 The Vectra C model also had a GSI version within the range, but the exterior styling (in my view) was somewhat toned down compared to the Carlton and Cavalier GSI that were produced in the mid and late 80’s.

So, the test car I was driving was the Insignia GSI Nav Sports Tourer 2.0 litre BiTurbo BlueInjection Diesel 4×4. 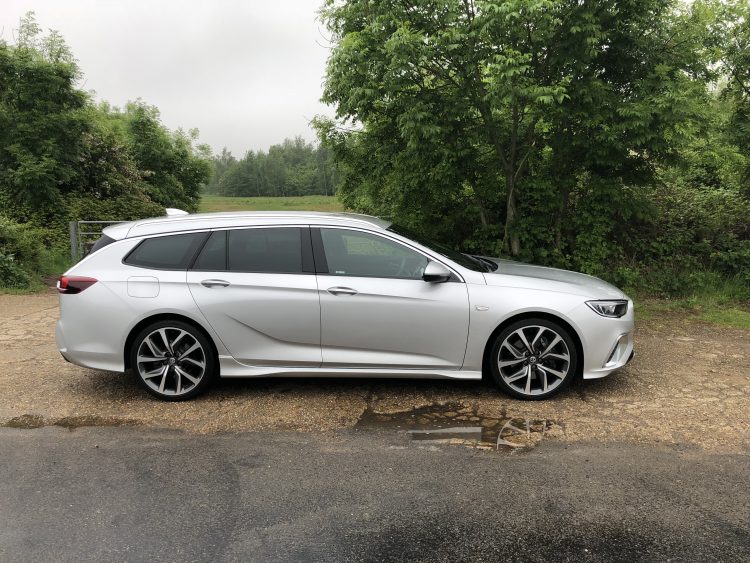 First impressions behind the sporty flat bottomed steering wheel are good.  I found myself rather comfortable in the inviting,  sporty and spacious front seats.   The dashboard is rather clean and functional.  If you are used to a new Insignia it will seem familiar…. but when you look closer and take note of the rather chunky – sporty steering wheel, the big chrome accelerator pedal (alongside the brake pedal), the Piano Black dash trim (with its flashes of chrome) and the stunning GSI sports seats…. the whole interior takes on a stealthy-sinister look which complements the outside look of the car. 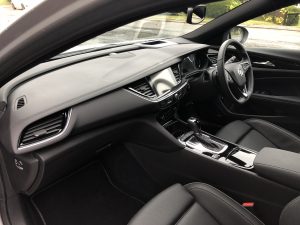 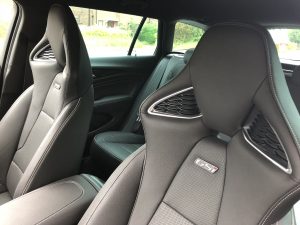 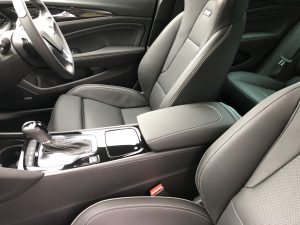 The instrumentation binnacle, with speedo and rev counter, is clean and clear to read.  The steering wheel adjusted nicely so I could get a clear view of all the important things I needed to know….(with my hands and arms in a comfortable position on the steering wheel). 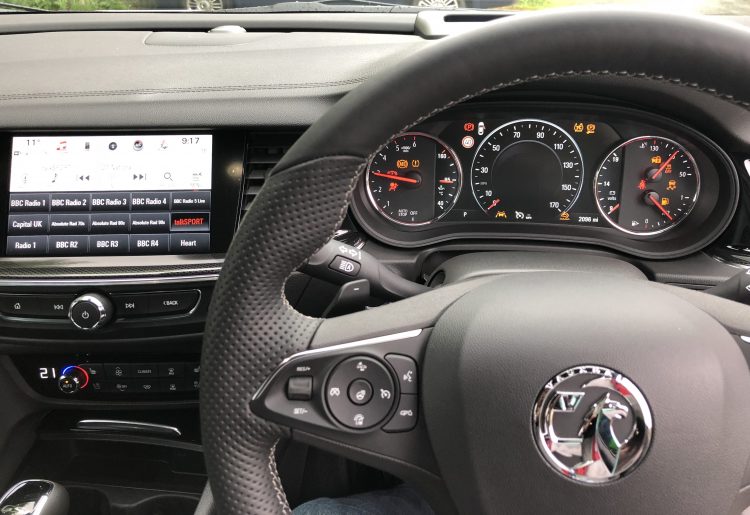 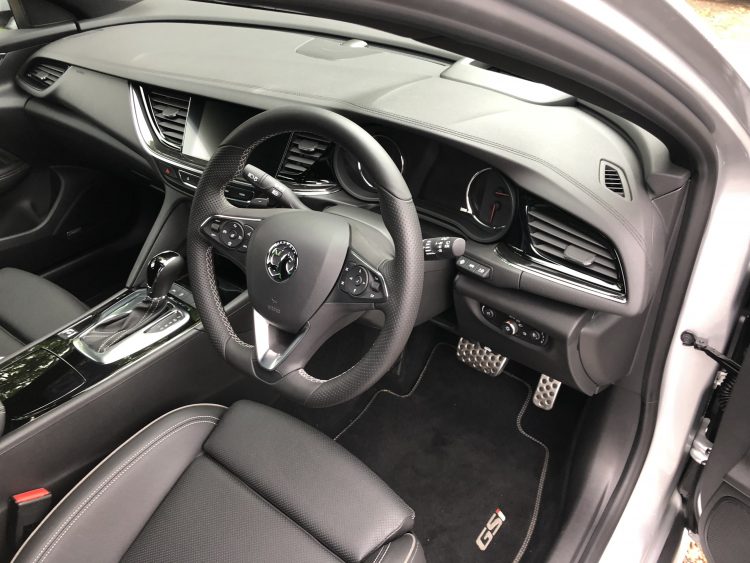 I pressed the engine “Start” button and the 2.0 litre BiTurbo diesel engine fired into life.

Knowing what I knew about this car from my previous blog postings, I was slightly apprehensive with how it was going to perform with its ride on the open road.

My reason for this train of thought was….

The Insignia GSI has stiffer sports suspension and springs.  It sits 10mm lower than a normal Insignia.  In developing the new Insignia GSI model it went through extensive testing at the Nürburgring at the hands of the Vauxhall’s Director of Performance Cars and Motor Sport, Volker Strycek (a previous DTM racing driver) and his team.

So in my head I was thinking this car would be a bone breaker….but as soon as I moved off it became quite evident that this was not the case.  My spine, vertebrae and muscles were all relaxed and I had no reason to hold my breath anymore.

In my humble (non racing driver –  average man) opinion…. up until this day I had always thought that the Vauxhall GTC was the most accomplished, “sure footed” riding vehicle that Vauxhall had produced.

The new Insignia GSI feels very surefooted on the road, and soaks up the potholes with ease.

The steering wheel gives just enough feedback on how much grip there is from the tyres ….and this is due to the fact that Vauxhall cleverly designed a unique software upgrade for the Electronic Power steering system for this model.

The new Insignia GSI has Vauxhall’s new FlexRide adaptive damping system as standard.  When I activated the Sport mode the FlexRide sharpened up the throttle response, suspension, automatic transmission gear changes and the steering wheel.  The whole car becomes more responsive and precise.

What I really like about this car is how deceptively fast it is. If you squeeze the “loud” pedal (the accelerator) you find that you can cover a lot of distance in a blink of an eye!  Inside the cabin, the engine sounds and wind noise are all muted. It’s a remarkably quiet and smooth ride….even on our bumpy B roads and with 20” alloy wheels!!!! 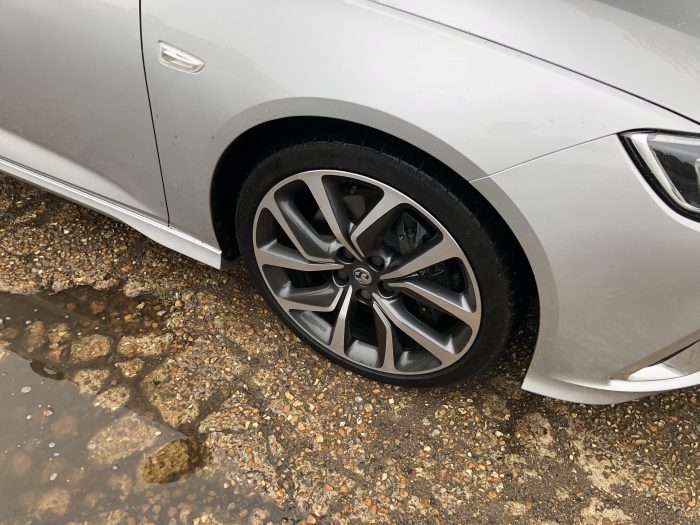 You can throw it into a corner and the ESP, and other electronic tricks, sort out how you will get in and around the corner. The all wheel drive system, with torque vectoring, then pulls you out of the corner with immense traction and speed.

The 4 pot Brembo brakes made sure that I would stop in time with no brake fade.

I do think a huge factor on why this car feels so comfortable and relaxing has to be the new 8 speed auto transmission. This goes about doing “its thing” with the least amount of fuss in auto mode….abiding by the local speed limits.

As standard the Insignia GSI has a head-up display which projects a speedo onto the windscreen in front of me. This means I could keep my eyes looking ahead through the windscreen. It can be configured to show different information.

I found this feature extremely useful to use and helped me stick within the speed limit.

When the national speed limit sign appeared in my eye line I then had some fun using the steering wheel-mounted shift paddles, which are just in the right place behind the steering wheel (this makes it easy to change gear with the paddles using my fingertips).

The gear changes are not harsh, so there is no need to wear a neck brace to prevent your head from banging the headrest with each gear change.

From the short time I had with the new Insignia GSI, it was evident that this car is a “Tourer” and I don’t just mean it in an estate car term.  It is light years ahead and is so much more impressive than the previous (very good) Insignia it replaces.

This car really is the best of both worlds.  It is an executive estate car that will cover long distances with ease ….”a long distance miles crusher!”

But with the flick of a switch, and a hard press of the accelerator pedal, it transforms itself into a more than adequate drivers car. It will conquer the most challenging A and B roads in the UK and will put a smile on your face with the feel of safety and predictable handling.

I really do recommend a test drive in the new Vauxhall Insignia GSI.

Options on this car. 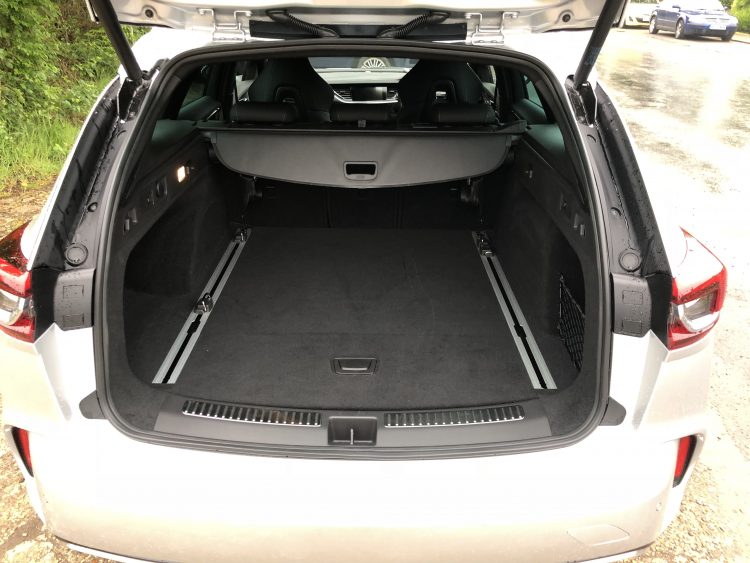 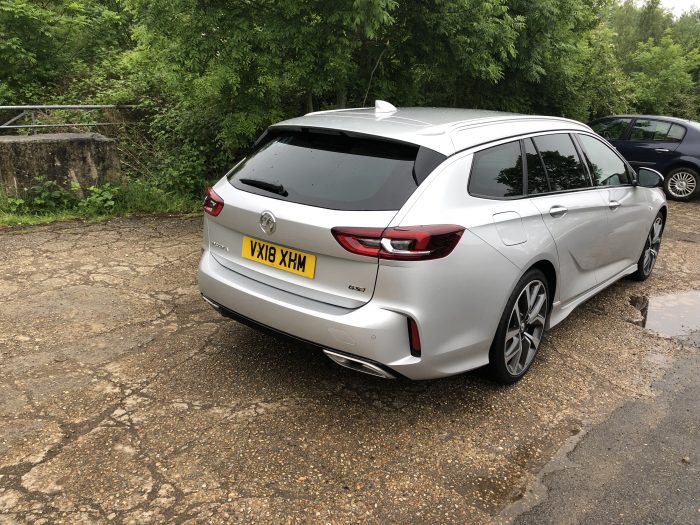