Vauxhall have finally revealed their GT Concept car ahead of the Geneva Motorshow. They have now finished teasing us!
It is powered by a 1.0 litre 3 cylinder turbocharged engine, produces 145PS and is the same unit that is in the Adam, Corsa and New Astra. This is where things get really interesting….. It is rear wheel drive with a 6 speed sequential gearbox. It has paddle shifts on the steering wheel, and can accelerate 0-62mph in less than 8 seconds. Top speed is 134mph and weighs less than 1000kgs.

From the pictures its proportions look good. It has a long bonnet, swooping roofline and a short backend giving it a sporty look. The GT Concept drivers and passengers doors are electric and can be opened by pressing a touchpad. The doors open into the front arches saving space by a special patented mounting that allows large openings in tight spaces. There are 2 cameras behind the wheel arches that show you a view around and behind the car so no need for rear view mirrors.  The windscreen is large and flows up into a panoramic roof. This is like the optional extra you can order on todays Zafira Tourer which was first available on the original Astra Sporthatch.

A very nice touch are the side windows.  It is very hard to see the transition from bodywork to glass, it all looks very seamless. I hope Vauxhall can incorporate this into its next generation road cars. 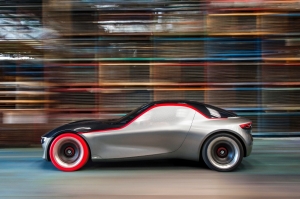 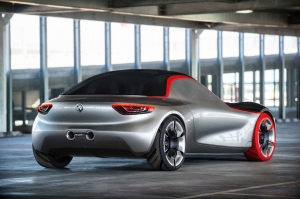 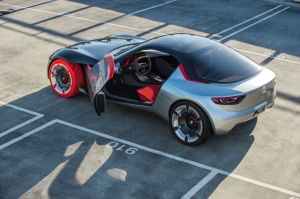 Another feature is the integrated headlamp and indicator. The lights have a 3 dimensional beam which is glare free using ultra-modern projection technology.  It is based on the Vauxhall and Opel IntelliLux LED matrix lighting that has been launched on the new Astra.

We created the GT Concept to capture the bold, emotional spirit of both the Vauxhall and Opel brands,’ said Mark Adams, Vice President, Design Europe. ‘It is dramatic, sculptural and full of innovations, which is our great tradition that we intend to continue. In the mid-Sixties, Vauxhall and Opel created their own interpretations of a light-weight sports car – the XVR and the Experimental GT – both of which were thoroughly modern with dynamic sculptural forms. It’s certainly difficult to reinvent iconic concepts like these, but just as each was avant-garde back then, so too is this GT Concept today – absolutely pure, minimalistic, yet bold and uncompromising. This coupe impressively demonstrates the continuous development of our design philosophy.’ 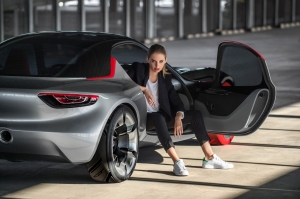 Vauxhall should give this car the go ahead and put it into production. It has all the makings to be a good little sporty number.  Light in weight, low stance and rear wheel drive,  Its styling reminds me of a cross between an original MK1 Tigra and a Opel Manta. There is space for this car in the UK, Germany, America and Asia car market. Do it.!!!!!! Put it into production Vauxhall/Opel and General Motors. If you do read this and do put it into production. You can thank We Blog Any Car later………….