Home/car news, reviews/Urban life in Cheltenham and around the Cotswold’s with a Vauxhall Mokka

Vauxhall have announced that they have reached half a million orders for the Mokka.

I had the pleasure of living with a Mokka in the real world for a week in Cheltenham.

So what is it?

It is Vauxhall’s answer to the Nissan Juke and Skoda Yeti. It is a small crossover vehicle with some off road capabilities if you choose the 4 wheel drive version.  When I say ‘off road’ capabilities….. I mean abit more off road than when it’s parked on their owners drive or in their garage.

It has a very charming ‘Tonka toy’ vehicle look with its chunky grey lower body mouldings on all the doors. This same theme carries on to the front and rear bumpers. With its big sturdy looking rear lights, and big wide grill to the front, this model looks like it has a huge grin on its face! 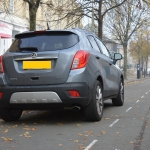 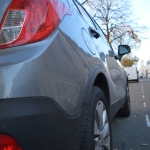 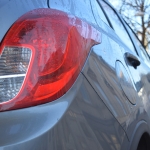 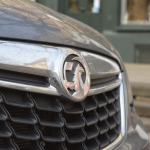 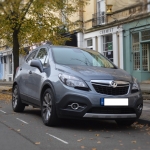 There is easy access entry to the vehicle with its wide opening doors. It is slightly higher off the ground than say an Astra or Focus and you tend to slide into it and not drop down into it. To make this clearer for you…. you step UP into a Range Rover or you drop DOWN into a Ferrari whilst getting in. If you are of average height and build you will find it easier getting in and out. 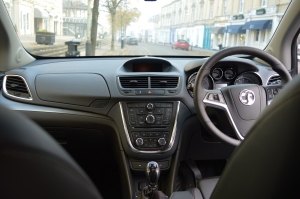 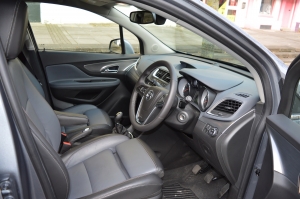 The dashboard has to be one of the best Vauxhall have produced to date. Everything is laid out at arms reach. The switches and controls are easy to read and have a quality damped feel to them when pressed. Even the finishing touches like the chrome around the air vents give it an upper class vehicle feel.

On the passenger side of the dashboard there is a double glove box which came in very handy. There are lots of useful cubbyholes around the interior to stow things like sunnies and sweets. The door pockets would fit a small umbrella with ease. It has 2 cup holders in the front and 2 in the rear. There are 2 x 12 volt sockets.. 1 front and 1 rear, and also a single USB socket up front which is very useful. If you choose the SE model with leather trim (I would advise to do that) the front seats are supportive and the base part of the lower seat pulls out for you longer legged folk. The driver seat has a very comfy arm rest that can be pushed out of the way when not needed (although I found I used it all of the time). The way the leather feels to touch and its unique smell was most pleasant, it just added to the whole quality feel. Vauxhall get a big thumbs up from me with the level of attention to detail with the stitching on the seats and on the door trims. 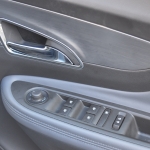 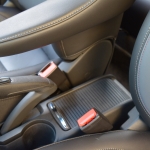 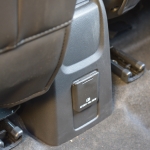 The steering is very light at low speeds, very easy to turn with only 1 or 2 fingers. At speed it weights up nicely so it does not become too sensitive to your every steering input. I found the steering to be very direct.

Being slightly higher in the Mokka then most of the normal traffic, visibility is good. You will get a clear view ahead and if you are like me on the motorway it is good to be able to see at least 3 cars ahead of the car in front of you.

Another place you will see Mokkas will be at the supermarket or the local retail park reversing in and out car park spaces. So I gave it a go and I can tell you with this car you will do it with ease thanks to its big door mirrors. I would recommend using the parking sensors but that is just me being lazy. When parking you can see the end of the bonnet from the driver seat and rear quarter visibility is good too.  A helpful detail is that the roof line does not slope too much. The rear boot window is very upright. If you look like you are close to the car, or wall, behind….. you will be! 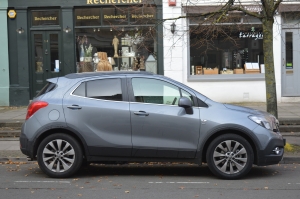 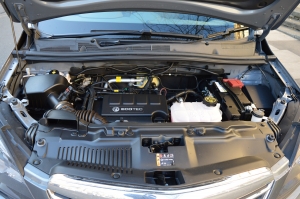 The suspension has a no fuss nature about it when going over cats eyes on the motorway or bumps and pot holes on A and B roads. The suspension soaks up everything it comes across including changes of road surfaces.

On the open road I found that there is not much body roll when cornering. If you attempt to do this at speed then of course you can produce body roll. You would have to push it hard into a bend, but really……. are you going to do that?

On the motorway I found it to be stable even on a windy day. Inside was quiet with hardly any wind noise, you only really hear the 1.4 turbo petrol engine if you push it hard through the gears.  The 6 speed manual gearbox is easy to use, if anything this would be the dullest thing about the car and nothing really to shout about. Vauxhall have improved their gear changes which is a world away from the first car I owned, which was a 1984 Nova 1.2 GL. You never knew which gear you had selected until you lifted your leg off the clutch pedal. The Mokka is quite the opposite and its gear changes are more than adequate.

I was obsessed with driving this Mokka at night. The reason why…… was its ambient mood lighting on the dashboard, around the radio unit, which gives off a cool white glow (very charming).

The only negative that I will write about the Mokka is the amount of room it has in the boot. To me the boot is small-ish. If you fold the rear seats down you have a huge area to work with, so this increases the load/boot area. I do feel that I am however being quite picky because the Mokka is not a big car in length or width. The fact it has plenty of leg room in the front and very reasonable leg room for the rear passengers, I do think that the lack of boot space is a good trade off! 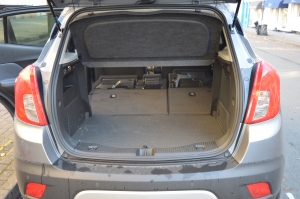 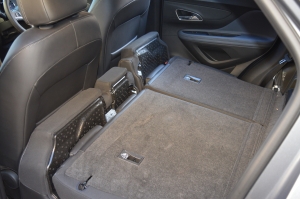 If you are in the market for a new or used car, take a close look at a Mokka.

I prefer the driving position.

Looks better. (In my eyes)

Great seating position for collecting food or coffee at the drive through.