This is the first official pictures of the new Volvo S90, the Swedish car makers version of a luxury saloon.

We shall start with the styling and at the front end of the S90.  It has a minimalist smooth styled front end with fuss free LED day light running lights.  This seems to be in total contrast to the other cars in this class with their saloons and estates having an array of LED lights, but thumbs up to the flush style of the grill and the way the bumper wrap around the front of the car.  No doubt if you look in your rear view mirror and see this car behind, you will know it’s a Volvo because of its new corporate grill and headlight design that was first seen on the latest XC90. 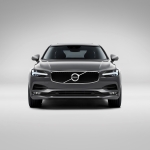 From the side view it has a professional ready for the boardroom business style which you would expect from a car in this class.

It has a nice styling touch at the bottom of the doors with a chrome moulding which I think your eye will be drawn to first. The familiar high Volvo shoulder line, that starts at the front wings, runs just above the door handles and ends above the rear lights. This is a feature of all Volvos and is present here.  It helps to enhance its silhouette, when looking at the car from the side, and in turn gives it its identity. 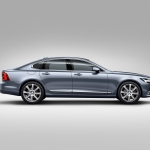 When I see this car in the metal the rear is going to be the first place from which I want to view this model. why? It is so interesting and not quite what I had been expecting.   The different contours and crease lines at the rear boot lid, between the rear lights, will give it an accentuated look in terms of its width, especially in a lighter metallic colour.  Volvo is written distinctively between the rear lights so when you see it from this angle for the first time you know who its maker is.  I congratulate Volvo on being so bold with the design of the rear end.  The only car I can remember that had a rear end that was a huge surprise in terms of the design, in the larger car market, was when I first saw an Audi A6 model year 1997-2004.  The front end was very Audi but the rear end, at that time, like nothing else. 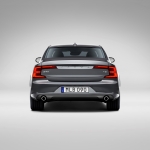 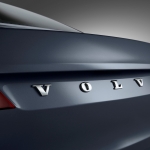 Inside is what I expect with new Volvo cars.  With its blend of lightly colour wood, soft leather, quality feel, well damped switchgear to touch and very clear instrumentation it will be a very pleasant, and lets not forget, a safe place to be.

This S90 will be equipped with a host of new technologies including cloud based services and apps.  It will have a advanced semi-autonomous drive feature Pilot Assist.  This function will give little steering inputs to keep the car in between lane markings on a motorway of speeds around 70-80 mph.

Another safety feature and a worlds first is the City Safety function.  It is a detection system that is capable of detecting large animals day or night and offers warning and brake support to help you avoid a collision. 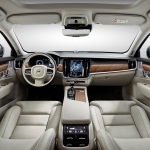 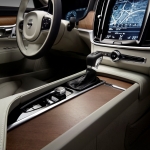 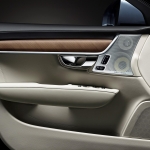 The S90 will also be available in diesel and will have the range topping  T8 Twin Engine plug in hybrid.

The T8 Twin Engine is currently  in the XC90.  It is a petrol engine with an electric motor.  It is all wheel drive and can drive upto 27 miles on electric power alone.  Power we speculate will be around 400hp.

“With the launch of the XC90, we made a clear statement of intent. We are now clearly and firmly in the game. With $11 USD billion of investment over the past five years, we have not only reimagined what Volvo Cars can be – we are now delivering on our promise of a resurgent and relevant Volvo Cars brand,” said Håkan Samuelsson, President & CEO, Volvo Car Group.

The S90 will be launched at the Detrot Motorshow next year.

This car looks to be more interesting than other cars in its class.  I am excited about the look of the car, the rear especially, but need to see it in the real world.

Volvo are continuing its very impressive upward curve in terms of styling and creating a premium feel to its new car models.

So far………………… its looking good for Swedish styling.

Check out this short Volvo launch video below.