This new Boxster is the first to be turbocharged and now comes with a new model number of 718.  2 versions will be available at launch ,with the entry model using a new 2.0 turbocharged flat 4 cylinder engine producing a whooping 300hp standard.

The other new Boxster model is the Boxster S.  This uses a 2.5 litre turbocharged flat 4 cylinder engine and produces 350hp.  Both models produce about 35hp more than the previous Boxster models.

Its not just the engine that is different….  Porsche have completely redesigned the body. The only features that remain the same as the previous Boxster are the front and rear boot lids, windscreen and the convertible roof. 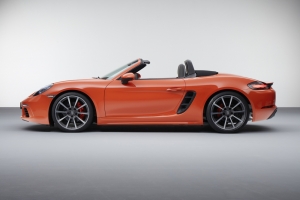 At the front the Boxster now has bigger air intakes in the bumper, newly designed Bi-Xenon headlights and LED daytime running lights.

From the side profile the Boxster now has new styled door handles, side sills and wheel arches.  The side air vents are larger for the turbo and incorporate 2 fins. The rear has also had a makeover with a new bumper, tail lights and PORSCHE written between the rear lights.

Inside The Boxster it has the new Porsche Communication Management system which is touch screen as standard. 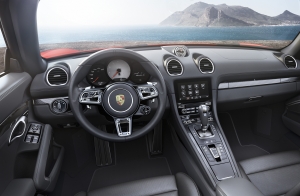 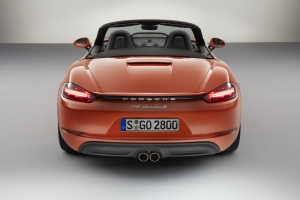 The chassis has been re-tuned for better cornering, and Porsche say that the electro-mechanical power steering system is now 10% more direct.

We Blog Any Car Stats:

I cannot believe that it has been 20 years since the first Porsche Boxster was launched?!?  Wow, how time has flown!  It is impressive that a 20 year old Boxster still looks good on the road.

To me this new model looks like a clean, fresh style but the true test.. will be the sound 0f the engine!  I love the sound of the old flat 6 cylinder engine. Will this mean that the prices of the previous Boxster used will hold their money… like the old Porsche 911 (code name 993) the last of the air cooled engines?