This is is the new updated Porsche 911 Turbo and Turbo S which will be available to buy in both coupe and cabriolet form. It will make its world debut at the Detroit Motorshow in January 2016.

Following on from the updates to the normal new 911 Carrera (a normal 911? is there such a thing?), both the new Turbo and Turbo S get a boost in bhp. Both cars are producing 20bhp more than the previous models so the standard Turbo produces 540 hp from its 3.8 litre flat 6 engine. This power increase comes from redesigned inlet ports in the cylinder head, new injectors and a higher fuel pressure. 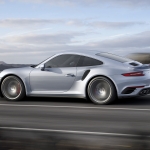 The 911 Turbo S gets 2 new turbochargers which help the engine produce a mighty 580 hp.

As standard both cars are equipped with the new GT sports steering wheel and the Porsche new infotainment system. This system gives you real time traffic information plus online navigation.

The new GT steering wheel is 360mm in diameter and takes its design inspiration from the 918 Spyder.  It has the new rotary mode switch on the steering wheel which has four positions for the driver which are : Normal, Sport, Sport Plus and Individual.  Another feature of the new 911 turbo is the Sport Chrono package with its additional Sports Response button. When you press this button the vehicle will give you maximum acceleration for 20 seconds.

From the front of the car you will notice the nice, but subtle, visual upgrades consisting of: New headlights, LED daytime running lights, redesigned front bumper, front air vents and new door handles.

At the rear Porsche have re-engineered the rear bodywork which includes: New rear bumpers with air vents for cooling the engine, completely redesigned exhaust system with dual tailpipes. and the rear engine lid cover is redesigned which now features longitudinal vents.

Following on from the new facelifted 911 Carrera it also has the new three dimensional style rear lights (or as Porsche call them “Aura-Style” illumination). 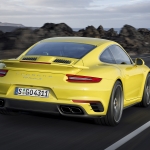 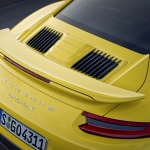 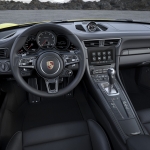 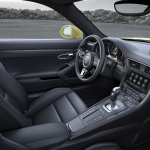 Porsche 911 Turbo S spec same as above with

On sale from today with deliveries late January 2016.

In our opinion…….Porsche philosophy is spot on.  Re-engineer, re-design, constantly looking for ways to improve.  It could be the handling or the performance, but they do not compromise the day-to-day usability of the car.

We know that owners will still have fun with this car 25 years from now and that they will still be able to use it as their main means of transport.  There aren’t many +200 mph cars on the market that you can do that with.

An extremely brilliant car has been re-engineered even better! 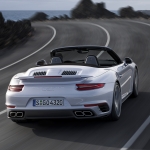