The New Alfa Romeo Giulia At The Geneva Motorshow 2016

The New Alfa Romeo Giulia At The Geneva Motorshow 2016

This is the new Alfa Romeo Giulia that promises to be the alternative to the normal German Audi A4, BMW 3 series and Mercedes C-Class brigade.
First impression from the front, which is its best view, it is striking. This is due to its angry looking headlights that give the whole front end a scowling look. It has the same effect on the eye that the original 156 had. You will not forget the first time you see it on the road. Nothing has a front grill like an Alfa Romeo. 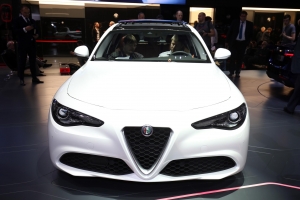 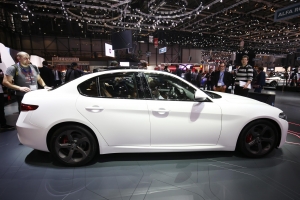 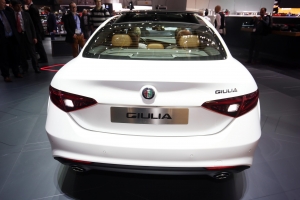 From the side and rear view it reminds me of the current Maserati Ghibli. (I guess that’s a compliment).
Inside is where Alfa Romeo will have to convince customers. The interior doesn’t have that clinical cold feel that you would get inside a German equivalent. The driving position I couldn’t fault, but it was left-hand drive version so I will have to wait until the right-hand version lands on our shores later this year.

I did get chatting to a Italian chap that was pushing and prodding everything inside. I’m sure he didn’t work for Alfa Romeo but he was so enthusiastic about the car. He asked me what I thought of it. I thought I would be very diplomatic and said “it’s okay, it’s a world away from my old Alfa Spider”. He then became even more enthusiastic because he realised that he was talking to a fellow Alfa man. I then fired this question back to him and asked “what do you think of it?” He replied with a grin “this is the car…….They have it right this time!” He spoke with so much passion he was almost overwhelmed with excitement and delight, I then asked him “what do you like about this specific car?” He answered again grinning and leaning across to me (as if it was a secret) “It’s an Alfa Romeo!”

Alfa don’t have to convince people like him. I’m sure he would, or maybe already has, put a deposit down on one. They have to convince the customers that would be interested in one of the German equivalents. This guy would buy any Alfa because it’s an Alfa, he is just so enthusiastic about the brand. He has probably been buying them for generations. He needs no convincing.

It reminds me when I was selling new and used 156’s in the late 90’s and early 2000. Back then people were taken a back by its looks, how it drove and the sound. The cars Alfa Romeo produced in those years did feel “alive” when you drove them. I used to enjoy the test drives, any excuse to drive one. There was such a buzz about the 147, 156, GTV and Spider.
I hope the same thing happens with this the New Giulia. 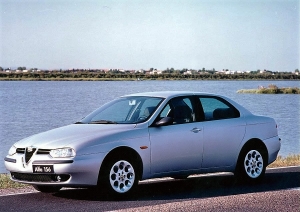 We Blog Any Car thoughts………….
Comparing its competition (and that includes the Jaguar XE), it is going to be a left field choice……an alternative in a very competitive market segment.
This car is all about being connected to its soul! If you don’t believe in that then go-ahead and choose a German equivalent. If you want to feel connection with the car you drive, then maybe this is for you. Check out the Alfa Giulia promotion video on my Facebook page. 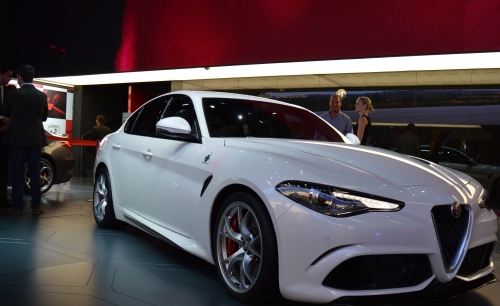 (Picture above of the new Alfa Romeo Giulia Quadrifoglio was taken at the Frankfurt Motor Show 2015).