The Last McLaren P1 Is Complete!

The Last McLaren P1 Is Complete!

Production of the McLaren P1 has now finished with the final one having now been made (only 375 were made in total).
This car made its first appearance at the Paris Motor show in 2012 with the first one delivered to its customer in 2013. McLaren had specific goals in mind with this car… they wanted to break lap records on track and they wanted it to be one of the best drivers cars in the world.  I think they definitely achieved this.
Every car was custom built to the specifications of its owner and took around 17 days to complete.
No two McLaren P1 cars are the same and because of this the McLaren Production Centre could only finish one car per day even running at full capacity! 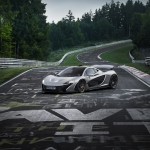 The last P1 that rolled out the McLaren Production Centre was in Pearlescent Orange. McLaren say this paint finish echoes the shade of the 64th and final McLaren F1 road car chassis 075. It is the inspiration for the colour Volcano Orange that you can order on todays McLaren road cars.
It has raw cabon fibre weave on the splitter, rear diffuser and the blades on the lower side of the car.
Inside it has lightweight carbon fibre shelled racing seats in black and orange Alcantara with gloss black switchgear, air vents and instrument bezels.

Mike Flewitt, Chief Executive Officer at McLaren Automotive commented: ‘The McLaren P1™ has achieved more than we ever expected of it since it was first previewed little over three years ago, both as a new generation of supercar, and in enhancing the McLaren brand globally.

‘As the direct ancestor to the fabled McLaren F1 – and the first in a new breed of hybrid-powered supercars – it had big shoes to fill, and it has more than succeeded. It has established itself as a true contender, proving to be more than a worthy rival on both road and track against long established rivals. It has done a fantastic job of becoming the halo product for the McLaren Automotive brand as we have grown the business into the three tiered, profitable outfit that we are today.’ 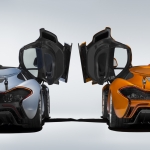 We Blog Any Car thoughts…………
This was a pretty special and ground breaking car. In development it covered an amazing 620,000kms…. which is 15 times around the world!  It had levels of downforce that a GT3 racing car would produce.  Not forgetting that it could be driven on battery power alone… making it great for the environment!
No doubt,  as I am writing this,  McLaren will be looking to the future. They will be already working on its replacement, seeing how far they can push the envelope in technology and design in true McLaren style. 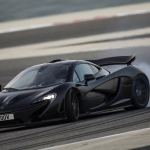