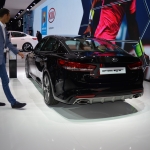 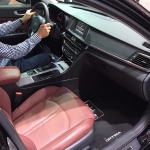 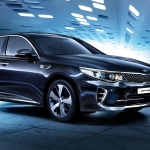 Kia launched this prototype at the Frankfurt Motorshow.  It will be Kia’s first high performance Optima when it arrives in 2016.  It has the new redesigned “tiger-nose” grille like the new Kia Sportage which made its debut at Frankfurt to.  This new “tiger-nose ” grille will be the new signature of new Kia cars.
The new Optima GT prototype has been a joint effort between two R&D centres.  One in Mamyang, Korea and the other in Russelsheim, Germany.  Kia claim that because of this it will meet the expectations of European drivers.

This car had us spending alot of time looking all over it, we were so impressed.  It has such a quality feel to the interior plastics, switches, leather and remember this is a prototype, so the real thing will be better still.  When inside the car, if you didn’t look at the badge on the steering wheel, it will have you believing that you could be sitting inside one of the top 4 German car makers.  Inside is a real nice place to be. 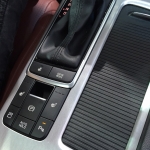 If it drives as good as it looks, it will be a competent alternative to the Mondeo, Insignia and Passat.  So if you are in the market for any of those cars, we suggest before choosing to have a look at the New Kia Optima.  Don’t forget the amazing Kia 7 year warranty.