Subaru BRZ Taken For A Spin

Subaru BRZ Taken For A Spin

A new Guinness World Record has been set for the ‘Tightest 360° spin’.  The record was achieved in a rear-wheeled drive Subaru BRZ at the hands of Stunt-driver Alastair Moffatt.

The Subaru BRZ has a standard 2.0 litre ‘Boxer’ engine. To enable the spin the traction control was switched off and the ABS disengaged.

Alastair said  “The Subaru BRZ was the perfect car in which to do it; light, highly manoeuvrable and easy to control. It’s great to have another record to my name”.

Check out the video below to see the ‘Tightest 360° spin’ being preformed in the BRZ. 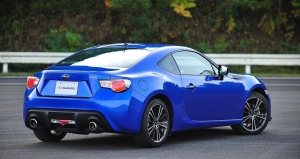