I was excited to see this in the metal. The success of the new Discovery is very important to Land Rover. Was it worth the trip to Paris and going to the Land Rover stand first to see it?

It was a real thought provoker, from various angles it looks very different. From the front it looks smooth, cool and sophisticated. Viewing it from the side I couldn’t help notice, and wasn’t too sure about, the rear overhang. My focus kept being drawn to it. View the new Discovery from any other angle and I didn’t notice it. 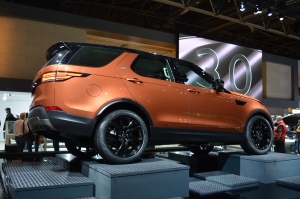 The strange thing was… the more I took time to look at the side profile with the rear overhang, the less it became a fault. Its load capacity is 2406 litres and in the UK it comes with 7 seats. So I will guess that’s why the rear quarter from the side looks the way it does. Small price to pay in looks.

Another talking point is the off centre rear number plate. Does the design work? Tell me what you think from the picture. 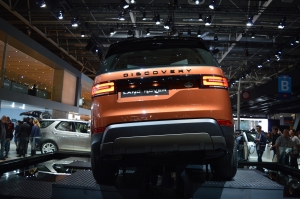 The closer you get to the new Discovery the more you notice how big it is from the outside, but open the door and slip into commanding driving position and you will forget all of that because you are faced with a calm cool world of wood and leather. 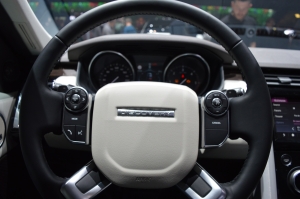 I was most impressed with the feel of the buttons and switch gear. I couldn’t stop playing with the fold down Climate Control panel where there is a cubby hole behind it (see picture.. very clever). 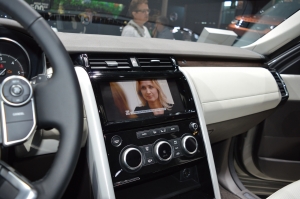 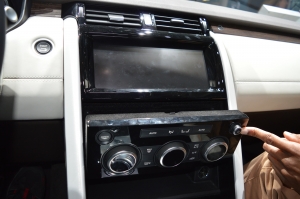 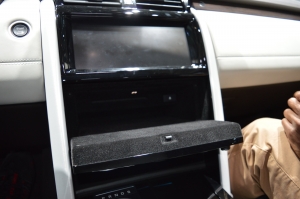 This is a winner for Land Rover in my eyes. It has that instant recognisable new Land Rover DNA styling. (It will look good towing a horse box or parked outside a bar in the posh part of town). You know what it is as soon as you see it. But something did niggle me with its styling. Does it have an American look to its design? (Side profile).