Being different is a really good thing. That was my first impressions on seeing this car at the Paris Autoshow.

There was a lot of interest in this the new Honda Civic. The stand was buzzing and it wasn’t just for the F1 car or the new NSX on show.
The Civic was on show in 3 different guises. A 5 door hatchback,  A 4 door saloon in blue (not sure we will get it in the UK) and the Type R Prototype.

My focus was on the 5 door Civic. Why? This is going to be the most common Civic you will see on our British roads.

I couldn’t get a really good photo of the red 5 door version so I used one of Honda’s press shots. Thank you Honda.

New Civic in terms of design is a million miles away from the last Civic.

The looks………
Well it’s different. Honda choose to go down their own road in terms of car design and that’s a good thing. When this car is launched in the UK and you are driving one, I am sure people will look twice at it and may even ask you what it is like. Why? It doesn’t look like anything else in the highly contested C segment car game. Think Astra, Focus, Golf.
So, its a left field choice, and left field can be good.
This model was the sport model but you cant help but notice the razor sharp front end styling with its big front end black air intakes.

Even viewing it from the side it has a aggressive sporty body shape with what seems a low front bonnet. Something I did notice is this car looks bigger than what it replaces and it is. It is now 30 mm wider and 130mm longer than the previous 5 door Civic. So it will be perfect for those weekend trips to the DIY stores and rubbish tips.

Dash has a good feel to it.

The interior was another talking point. Mainly because this car that I was viewing was a pre-production model. It was only number 2. Take a look at the chassis number below. 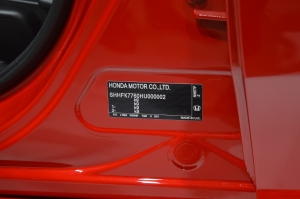 Because of this I will ignore some small trim issues. Why? Because I know that the girls and boys at the Swindon factory do a great job day in and day out in terms of build quality.
The switch gear and plastics on the dash have a good feel to them with a real nice feel gripping the steering wheel. The seats felt very supported and comfortable within the short time I had inside the car. Leg room in the front and rear was good to very good. The boot is a good size too.

I would really like to see the finished article, the fact this car was a pre-production car Honda have done a great job, meaning this car will feel even better when its being produced.