This is the new Audi R8 Spyder. It is available to order in the UK later this spring for deliveries late 2016.
The dry weight of the R8 Spyder is just 1,612 kilograms thanks to aluminium and carbon fibre.
The roof can be opened at speeds up to 31mph and folds away in 20 seconds.
The R8 Spyder debut Audi smartphone and Bang & Olufsen audio. This comes with 13 speakers  including two headrest mounted speakers by the drivers and passenger’s ears. Surely with the roof down I would want to hear the 5.2 FSI V10 engine! This propels it to 0-62mph in 3.6 seconds with a seven-speed S tronic transmission. It is capable of doing 197mph. 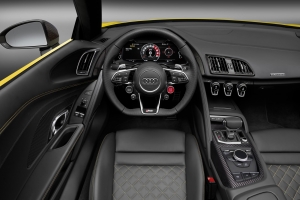 We Blog Any Car thoughts……….
Well the new R8 Spyder has not surprised me in anyway with its looks. Just what I would’ve expected. I do expect it to sell well. Why? 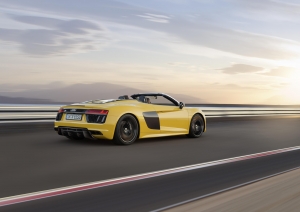